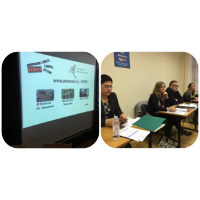 As it happens in most kick off meetings partners spend a considerable amount of time introducing themselves, their activities, their aims, and their mission statement. Slovenian Third Age University, however, chose to introduce itself by presenting CINAGE, European films for active ageing as an introduction to their field of educational endeavours and research. Namely, CINAGE films can be used in a variety of situations, be they of informative or educational nature.

From the 16th to the 18th December took place in RIGA the kick-off meeting of the project Promoting Third Age Education. It is a new Erasmus+ KA2 project co- funded by European Union and uniting partner organisations from Latvia, Lithuania, Spain and Slovenia. There are several outputs planned in this project, one of the most outstanding ones being a model and a course to be applied in different countries, helping adult educators to get involved in older adult education.