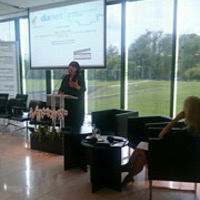 Dušana Findeisen introduced CINAGE as an example of good practice, uniting generations in a natural creative process-writing a script, acting out the story, shooting, post producing the featured film about what: active ageing is.

It is important for each generation to bring into the project innovative complementary knowledge.

In the case of CINAGE this was knowledge and increased awareness about active ageing (older participants) and film making (master students of the Academy of Theatre, Film, Radio and Television).