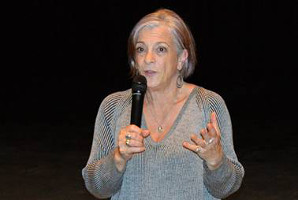 There was a presentation about the project and a screening of the 12 CINAGE films with Q & A afterward at the Revelstoke Performing Arts Centre in Revelstoke, BC (Canada!).

Thank you so much for sharing the short films and your insight last night. I haven't stopped thinking about it! There were so many messages communicated about ageing...the possible realities and the choices, both positive and negative, that are out there as we age. My favourites were the uplifting messages in the films about the women's cycling tour, the man/revolutionary who got a new lease on life by going to the college and sharing his history...being validated, and the last one with the man playing the polka on the accordion, influencing the life of everybody around him....a contagious passion. SO, SO GOOD! What a worthwhile and valuable project!